‘Some even need to vomit’ 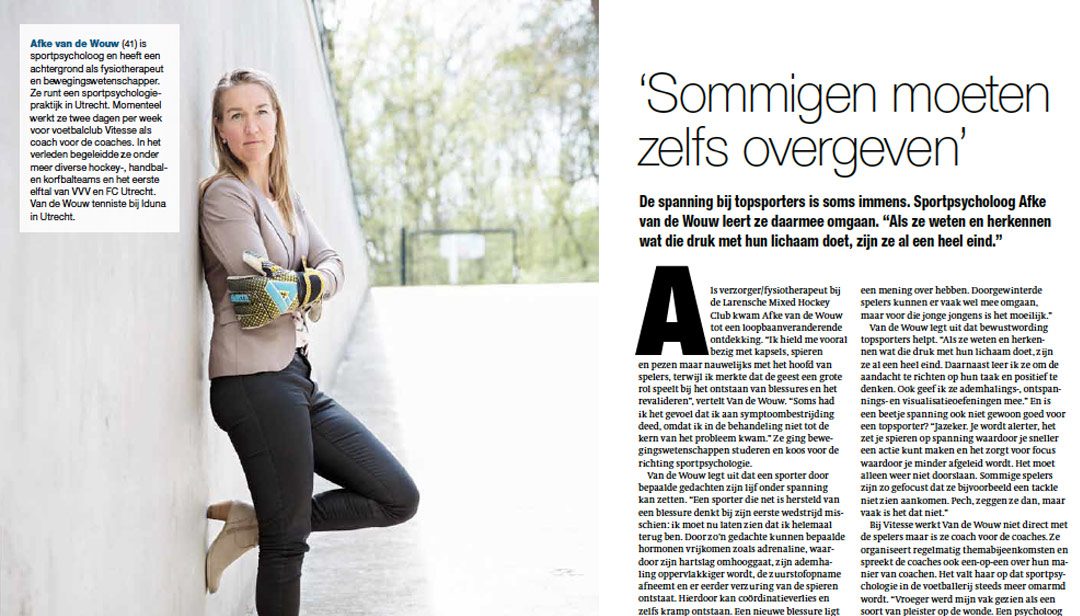 The tension at elite athletes is sometimes immense. Sports psychologist Afke van de Wouw learns them how to handle it. “If they know and recognize what pressure does with their body, they are already a long way.”

As a physical therapist at the Laren Mixed Hockey Club Afke came to a career change. “I was Always busy with, muscles and tendons but hardly with the head of players, while I noticed that the mind plays a large rol in causing injuries and rehabilitation.” says van der Wouw. “Sometimes I had the feeling that the only thing I was doing was symtoom combat, because I never got the the heart of the problem in treatment.”

She went to study human movement Sciences and chose the direction sports psychology. ‘Van de Wouw explains that an athlete can put his body under tenstion by certain thoughts. “An athlete who has just recovered from an injury may think at his first game: I now need to show that I’m all the way back. By such a thought certain hormones can be released such as adrenaline, which causes his heart rate to increase, his breathing is more superficial, the oxygen uptake decreases and there are earlier acidification of muscles. This allows coordination loss and even cramp. A new injury is lurking. ” For some athletes, the tension can be such of a amount that they have to throw up, tells Van de Wouw. “That is physiologically not the best preparation. After throwing up  your body is upset. ” But they understand that players suffering of the– sometimes immense – pressure. “I have stand in the catacomben of  De Kuip wiht the players. Then I feel the tension aswell, while I myself do not have to go on the field. There is not only the stadium that gives pressure; There are also millions watching at home.